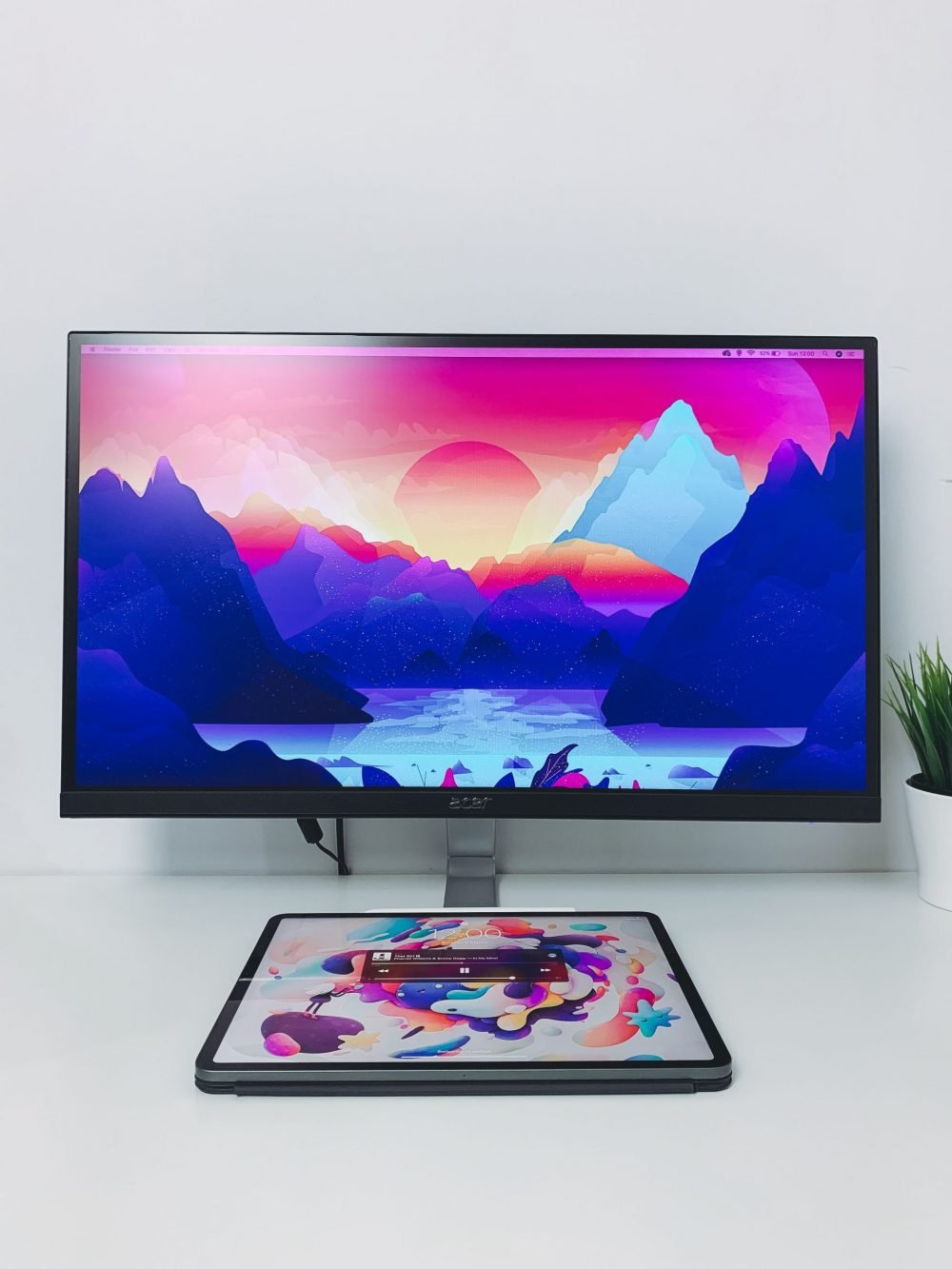 First of all, there’s a lot of fuss about HDR in displays. Whether it’s a TV, Computer Monitor or Mobile device. It has created this big confusion of branding everywhere. A few years ago, 4k was probably the most overused term on display packaging and specifications. It was rather a nice resolution bump from the standard FHD resolution.

However, there was no distinctive standard for display vividness and brightness that bring upon a nice jump over SDR(Standard Dynamic Range) standard. As a result, HDR (High Dynamic Range) appeared in the spotlight and introduced a standard that provided higher fidelity frames in terms of both contrast and colors(more on that later).

This guide should be helpful in making a decision regarding your next HDR10-compatible display purchase. Most noteworthy, what are the things you exactly need to pay attention to when buying a new HDR monitor? Essentially, all the features that a monitor should have in order to get the “most of” HDR10 experience while not spending a crazy amount of money.

These are the important aspects of HDR that you need to understand before buying an HDR monitor. Probably, the most simple one is Brightness or Luminance. According to VESA(Video Electronics Standards Association), there are several HDR standards based on the peak luminance. But we’re going to be dealing with the most popular ones:

As the name suggests, HDR 400 has the least amount of requirements for peak brightness. Furthermore, you might be wondering what is Peak Brightness? It’s just as it sounds, e.g the brightest a display can get for a certain period of time(irrelevant for SDR). Similarly, there’s a concept of Sustained Brightness e.g the brightest a display can get while also maintaining that brightness level. Unfortunately, there are no specifications regarding Sustained Brightness which is probably more important and what a display represents most of the time.

Peak Brightness is mostly used in a specific portion of a display for a short period of time to make some scenes appear more realistic e.g Flame of fire, Screeching of a car door. Furthermore, TVs probably require higher brightness ratings than monitors for better HDR effect as they are placed farther away. Most noteworthy, at least 600nits of rated peak brightness would be required(higher would be better) for an enjoyable HDR experience in an in-door lit environment.

Talking about HDR 600 and HDR 1000 standards, they definitely have higher theoretical brightness requirements than HDR 400. But the difference between 600nits and 1000nits is not that big as it sounds. Therefore, HDR 600 is the standard of choice. More displays support this standard and definitely more affordable than HDR 1000 supported displays. Above all, most HDR600 supports all the key features(later explained) required for enjoyable HDR experience.

Probably, most of you might be wondering what is contrast and why is it important to consider? It’s basically the difference(a ratio) between the brightest white point and the darkest black point. Typically the contrast ratio of an IPS display is 1000(B):1(D). With ‘B’ and ‘D’ stands for brightest and darkest points respectively. They are used for understanding and actually not written this way.

First of all, you need a display with a contrast ratio higher than 5000:1 for an enjoyable HDR experience. Some of you might be wondering how that much contrast ratio is achievable for a display? It’s the magic of a backlight dimming method implemented in backlight powered displays like LCDs, QLED etc. There are small “zones” that can dim based on the scene appearing on the screen while keeping bright parts to stay bright to enhance the black level performance of a display resulting in increased contrast ratio. This array of points are called local dimming zones.

FALD uses an array of LED backlights for dimming. In contrast, Edge-lit Local Dimming uses LED along the sides of the screen area. The edge-lit method requires less number of dimming zones at the cost of inferior contrast ratio. It’s just a marketing method to advertise Local Dimming which is actually not as good as FALD. There are some exceptions where Edge-lit overall gives a better contrast ratio over some poor FALD solutions. Therefore, the takeaway is to avoid Edge-lit Local Dimming Displays. FALD is often much superior to edge-based local dimming and suitable for HDR displays.

In simple terms, It is an abstract mathematical model that explains defined ranges of colors and tones that a digital file can. They are of various types but the popular ones being:

Starting with the smallest one in range, sRGB is the most popular color gamut used for most applications including web, photos, and even graphics. In recent days, most displays cover complete sRGB gamut. Moving on, Adobe RGB covers the entire spectrum of sRGB and it is a much wider color gamut. It is mostly used for professional applications like DSLR images and printer.

Later, DCI-P3 was introduced as a standard for digital cinemas as it was the range cinema projectors could produce. It is quite similar to Adobe RGB but extends more towards reds and yellows instead of blues and greens. it’s not necessarily covering less range of colors than Adobe RGB, but rather shifting more towards aforementioned reds and yellows of the RGB spectrum.

If you want to learn more about color spaces, I’d recommend checking out this page. Most noteworthy, HDR 600 and HDR 1000 have guaranteed support for both sRGB and DCI-P3 color spaces. While HDR 400 needs to support only sRGB color gamut. Therefore, if you’re looking for a decent HDR experience, you should look for a display that supports at least 125% sRGB and >90% DCI-P3 coverage.

The Color Depth refers to the number of bits per pixel to represent a specific color on the display. The higher Color Depth monitors support more ranges of colors which is essentially HDR monitors require for representing vivid images. The number 10 in an “HDR10” monitor relates to 10-bit Color Depth.

According to Bit Depth performance criteria by VESA, all HDR standards require at least True 8-bit Color Depth. Begging the question that what is “True”? First of all, you need to know about a simulation of a color technique called Dithering(also called Frame Rate Control or FRC). FRC makes the pixel flash between two different shades of a color which makes the viewer feels like it is displaying the average of that color.

FRC technique is very effective for HDR monitors that don’t have true 10-bit Color Depth. The configuration of 8Bit+FRC tries to accommodate for the required 2Bits to allow for HDR10 compatibility. The technique is very cost-effective to implement as compared to true 10Bit Color Depth which is often found in displays costing over thousands of dollars and without any other key features of HDR. Most noteworthy, it isn’t a gimmick technique with some reviewers agreeing on noticing minimal differences between a true 10Bit and 8Bit+FRC.

The HDR 400 standard requires an 8Bit display, while HDR 600 and HDR 1000 requires at least an 8Bit+FRC or True 10 Bit display. Hence, we recommend choosing an 8Bit+FRC compatible monitor for enjoyable HDR experience.

First of all, the implementation of mobile HDR isn’t as vague and incomplete as monitors and TVs. Most of the mobile phones specifically flagship ones have really high quality displays whether it’s an LCD or OLED. Even more, the introduction of OLED in the most current generation devices allows for excellent contrast ratio, wide color gamuts, and brightness. However, if you want to learn more about complete mobile specifications and not just displays, here’s a helpful article.

We recommend choosing a display that matches these key factors for an affordable and enjoyable HDR experience. HDR600 passes most of these standards and can be a perfect choice for your new HDR display.

IS QLC SSD Worth Buying? A Newbie's Guide