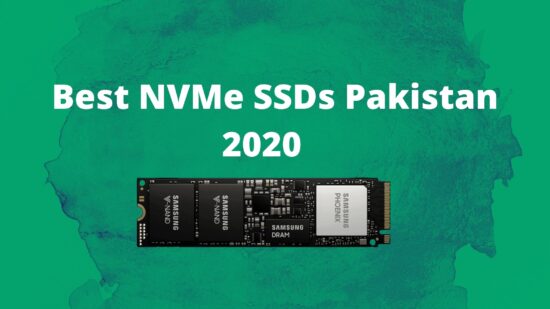 NVMe SSDs are definitely a step up in Speed from a SATA SSD, but they are a little bit expensive too. There are not a lot of options in COVID.

So, I am going to list and rank all the NVMe SSDs available in Pakistan at the time of writing this article.

First, let’s answer some questions for some of our curious readers.

Is NVME better than SATA SSD?

Contrary to the popular opinion that NVMe is better than SATA SSD, I don’t think so.

So unless you are copying and pasting a lot of large files on a daily bases or doing Photo or Video Editing, you are not going to see the difference in speed between NVMe and SATA SSD.

If you do not want to take my word for it, take a look at the video below. The first one is the NVMe, the second is the SATA SSD, the third one is a simple Hard Disk.

If you are interested in a SATA SSD, this is my list and guide for SATA SSD for Pakistan 2020.
SSD Guide and List of SATA SSDs: Pakistan 2020

This is why, if you are on a budget or do not care about gimmicks like 3000 MB/s, you should stick with a SATA SSD. SATA SSD is cheap and they perform the same in real life.

Minimum Size For an NVME Drive?

If you really want to get the blazing fast speeds of NVMe, you have to get at least 500 GB NVMe SSD to consider it an upgrade.

The 128 GB or 256 GB versions of NVME have almost the same write speeds as a good SATA SSD unless you are buying Samsung 970 EVO Plus.

If you are not limited by the m2 form factor in your computer, you should buy a SATA SSD of 250GB instead of 128GB NVME SSD.

So yes, NVMe is expensive but it is also more durable than a SATA Drive.

HMB vs DRAM in NVMe?

There are DRAMLess SSDs in NVMe too, which is why another method is used in some of the DRAMless SSDs to make up for the lack of DRAM and it is called Host Memory Buffer (HMB). Not all DRAMless NVMe SSDs have HMB.

The HMB uses a portion (100-500 MB) of System Memory or RAM to store mapping information of the SSD on the RAM.

HMB significantly increases the random Read/Writes of the DRAMless SSDs but a DRAM SSD will definitely outperform an SSD with HBM.

An example of this is ADATA S5 Gammix, which is a DRAMless SSD but it has HMB and the speed of this SSD is really good. Most users would not even realize the lack of DRAM in this SSD.

If you are only going to fill up the SSD to 80%, then it would not matter a lot, what SSD you buy as long it was a fast SSD to start with.

There are two types of m.2 SSDs. M.2 is the form factor name, the chip size in which NVMe is available nowadays. M.2 SATA looks exactly like NVMe SSD but there is one difference between them physically speaking.

The above picture should clear the physical difference between an M.2 SATA SSD and an M.2 NVMe SSD. The speed of the M.2 SATA SSD is still the same as a normal 2.5′ SATA SSD even though it looks like an NVMe SSD.

Kingston A2000 is the bare minimum, I would recommend anyone to buy if they are looking for an NVME SSD. It has a DRAM Cache which Linus loves so much.

Although it does not have the fastest NVME Speeds that you expect from PCIe, it is definitely an upgrade over any average SATA SSDs.

Also, this is the cheapest NVME SSD starting at 8500 rs for 256GB version which makes it available for all budget users.

Adata XPG Gammix S5 is a mid-range SSD targeted to Gamers and Enthusiasts. Oddly enough, it still does not have a DRAM which Gamers love to have, even though they don’t need it always.

It does have HMB (Host Memory Buffer) which helps a lot in storing the location map of each and every block on the SSD in the System RAM.

One more unique feature of this SSD is the heat sink, I was skeptical too at first. But after testing it. I can easily say that the temperatures are 5-10 degrees Celcius lower with the heat sink.

Gigabyte NVMe SSD is just like the SATA version of Gigabyte SSD. Fast, Cheap, and No DRAM Cache. But there is HBM in this SSD which should compensate for the lack of DRAM.

This is my favorite DRAMless NVMe SSD in this list because it is cheap, affordable, easily available, and provides the best bang for the buck.

Adata XPG Spectrix S40G is one of the favorite SSDs among Gamers because it has RGB lights. It looks amazing with a full rig using RGB parts.

The looks are not the only thing good about this SSD, the performance of this SSD is really good too. It also has a DRAM Cache for an extra performance boost when it is above 80% full.

But you also have to premium for these RGB lights, this is why it costs the same as XPG Gammix S11 Pro which performs better for the same price.

Adata XPG Gammix S11 Pro is the best NVMe SSD available in Pakistan from Adata. It is definitely not the best NVMe but still, it performs remarkably well for its price.

This is better than Spectrix S40G for the same price and it has the same heat sink as the XPG Gammix S5. The XPG S11 Pro provides so much more value for money than the Gammix S5 Pro.

So if you have the money and want a really good NVMe SSD, this is the bare minimum you should buy.

Addlink S70 is the best SSD to buy if you want great performance and do not want to break the bank. This is the only SSD available in Pakistan that can compete with titles like Samsung 970 Evo.

Addlink S70 can even beat the best of Adata XPG S11 Pro which is extremely impressive and it costs the same.

Samsung 970 EVO Plus is the best NVMe SSD you could buy except Samsung 970 Pro which is not very budget-friendly even for enthusiasts.

Even though Samsung 970 EVO is the cheapest NVMe SSD, Samsung has to offer. It is still not cheap, but if you have the money, it is so worth it.

Please consider the following points before buying an NVMe SSD.

NVMe SSD is not significantly faster than a SATA SSD in real-life usage.
A DRAM Cache SATA SSD is better than a DRAMless NVMe SSD in most scenarios.
NVMe SSD heats a little bit more than a SATA SSD, so make sure to have a good air flow inside the case.

NVMe SSD lasts generally lasts longer than a SATA SSD.
Please do not buy a PCIe Gen3x2, it only uses two PCIe lanes instead of 4 lanes which PCIe Gen3x4 uses.
The best size to buy an NVMe SSD is around 500 GB.
NVMe only performs better than a SATA SSD in Photo and Video Editing or when you are transferring large files from one place to another. So, do not waste your money, if you can not afford it.

For my personal recommendations,

Kingston A2000 is the minimum I would buy if I was going for an NVMe SSD. Otherwise, I would buy ADATA SU800 SATA SSD instead of Transcend 110s or Adata Swordfish.
Gigabyte NVMe SSD is the best DRAMless SSD on the list considering the price/performance too. It performs better than the Kingston A2000 but it does not have a DRAM.
Addlink S70 or XPG S11 Pro are the SSDs you should consider, if you want a true NVMe SSD performance.
If you want the best of the best and also have the budget, Go for Samsung 970 EVO or 970 EVO Plus.

Everything You Need to Know About Google Photos (Complete Review)