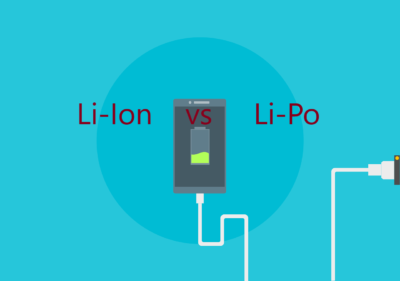 The Li-Ion battery was the popular choice of battery in every Smartphone up to the year 2018. But In 2019 and 2020, the smartphone manufacturers have been pushing Li-Po batteries in their Budget and Flagship smartphones.

The answer is not just a yes or no. Both battery technologies (Li-Ion and Li-Po) has its advantages and disadvantages. This is why I am going to compare in different sections like Lifetime, Power Density, Energy Density and Cycle count, etc.

This Article would cover:

This Article would not cover:

Li-Ion batteries are being used in electronic components since 1991 when Sony commercialized it that year. Since then, its usage and applications have been increasing from Electric Cars to iPods.

A big misunderstanding is that the Li-Po is another and separate battery technology which is not true. Li-Po is actually the third generation or third type of Li-Ion Battery.

These are the three types of Li-Ion and a basic comparison as to why the other two generations even exist.

The Prismatic form factor of Li-Ion batteries is used in smartphones and it sits right in between Li-ion cylindrical form and Li-Po batteries in terms of energy density, size, and weight.

The Li-Po could be manufactured in different sizes and shapes unlike Li-ion for their application in toys, headphones, computer mouse, etc.

Energy Density is measured as Energy/Volume which means Watt-Hour(wh)/Volume, WH/m³, or Joule/m³. Since Joule and Watt-hour are both units of energy.

It means that how much Energy can be packed in some space or volume. The more energy in a small space means more density or vice versa.

Energy density is sometimes confused with Energy/KG or WH/Kg. The Energy/Kg is called specific energy and not Energy Density. These two concepts are often mixed with one another and it is really important to understand them.

This is a really important factor for smartphones as we don’t have a lot of space inside a smartphone. So, we have to decide whether we want a Li-Po battery with low weight to keep the overall weight of the smartphone low. The alternate is to get a Li-ion battery with low volume if there is not enough space for a bulky battery.

But in terms of volume, the Li-ion consumes 15-20% less space than Li-Po for the same energy density.

But on the other hand, for smartphones with batteries above 4000 mAh, it is fine to choose Li-Po because of the huge size of the battery, the energy density would be plenty even for a Li-Po battery for one day use.

The maximum power available per unit volume (Power/Volume), W/m³, or W/L. A battery with higher power density can discharge large quantities of currents in a short time compared to a battery with low power density.

Li-Po batteries are more power-dense than Li-ion batteries for the same volume.

The applications such as drilling, acceleration of a car, RC Quadcopters, or a high-end gaming laptop running at peak CPU frequency requires high power density.

One important application of high power density in smartphones is fast charging. The Li-Po are known for their faster discharge rates as well as faster charge rates. It is due to the Li-Po batteries that we now have smartphones charging in about 35 minutes.

The shape and size are really important factors when it comes to picking a smartphone battery because of how little space is available inside a smartphone.

There is not a lot of comparison between Li-ion and Li-Po when it comes to creating different sizes and shapes for each application. The Li-ion cell’s shapes are limited to a cylindrical shape and rectangular shape (prismatic).

The Panasonic batteries on the right image is an example of different shapes and sizes obtained by Li-ion batteries. Sadly, there i8s not a lot of flexibility in shape and size when it comes to Li-ion.

The Li-Po, on the other hand, is on another level if we compare the shapes and sizes of Li-Po with Li-ion.

All of the shapes in the picture above are available for a Li-Po battery. Not just the shape, the size is also really impressive. A Li-Po battery could be as thin as 0.5mm and 0.6g.

Due to the flexibility of their sizes and shapes, the Li-Po batteries are widely used in portable devices such as Bluetooth headphones, Bluetooth mouse, Electric toys, Remote control cars, helicopters, and quadcopters, etc.

The shape of a Li-Po battery inside a Bluetooth is shown in the above picture. The flexible shapes, design, and sizes are a double-edged sword too. While they provide batteries of different sizes and shapes for different applications but they also make it extremely difficult and expensive to design and manufacturer batteries separately for each device.

The lack of different shapes and sizes for Li-ion batteries makes it really cheap for mass production. Generally speaking, the cost of Li-ion batteries for a smartphone is a lot cheaper than Li-Po.

This graph should give you an idea about the cost of Li-ion batteries.

The flexible size and shape of a Li-Po is really handy for small and weird shaped products but this also increases the complexity. The design and production of different size products become really expensive. This is why the cost of Li-Po is at least twice the cost of Li-ion.

The cost of Li-ion batteries right now is 0.1-0.3$ per Wh depending on the production capacity. The Li-Po costs at least twice of this.

Smartphone Manufacturer’s main goal is to save cost above everything. By using shape and size-specific Li-Po battery in a smartphone, the manufacturer is able to save some space for other components and also get maximum capacity for the weight of the battery, this ends up saving money.

The Li-ion is relatively more unstable than a Li-Po battery. There are a lot of reasons for this. But I feel like a video would be much better for the demonstration of the safety of Li-ion and Li-Po.

The Li-ion battery is definitely more dangerous than Li-Po when it comes to short circuits or leaking but the build of Li-ion is more sturdy and can handle more drops than Li-Po.

This video is for the testing of Li-ion batteries, short circuit tests, drop test, puncture test, and much more.

The next video is to test the endurance of Li-Po batteries.

To keep things simple, if you charge your phone from 50-100% and then discharge it back to 50% before charging again, this would count as half or 0.5 charge/discharge cycle.

This lifetime of a battery is not explained properly anywhere as it changes from one battery model to another even for the same technology (Li-ion or Li-Po).

These values are based on hit and trial method, they are not accurate, and please do not quote me on this. But these values should give you a good idea of battery life in different smartphones and why they are not the same.

At the end of the day, if you do not properly use and charge your smartphone’s battery, it will die out before you expect it. The Li-ion and Li-Po are almost the same when it comes to using and optimizing them. This is why all of the important points in this heading will apply to both batteries.

The following are the best practices to maintain if you want to get the best performance and durability out of your smartphone battery:

Li-Ion Vs Li-Po (In Practical):

If the goal is a battery that will last longer throughout the day, lasts longer over the years, and should consume less space, then Li-ion is better.

If the goal is a battery that will charge faster, outputs a lot of power for demanding applications, have flexible shape and size, is light, then Li-Po is better.

I am going to summarize everything in this article by making a table of comparison between Li-ion and Li-Po battery.