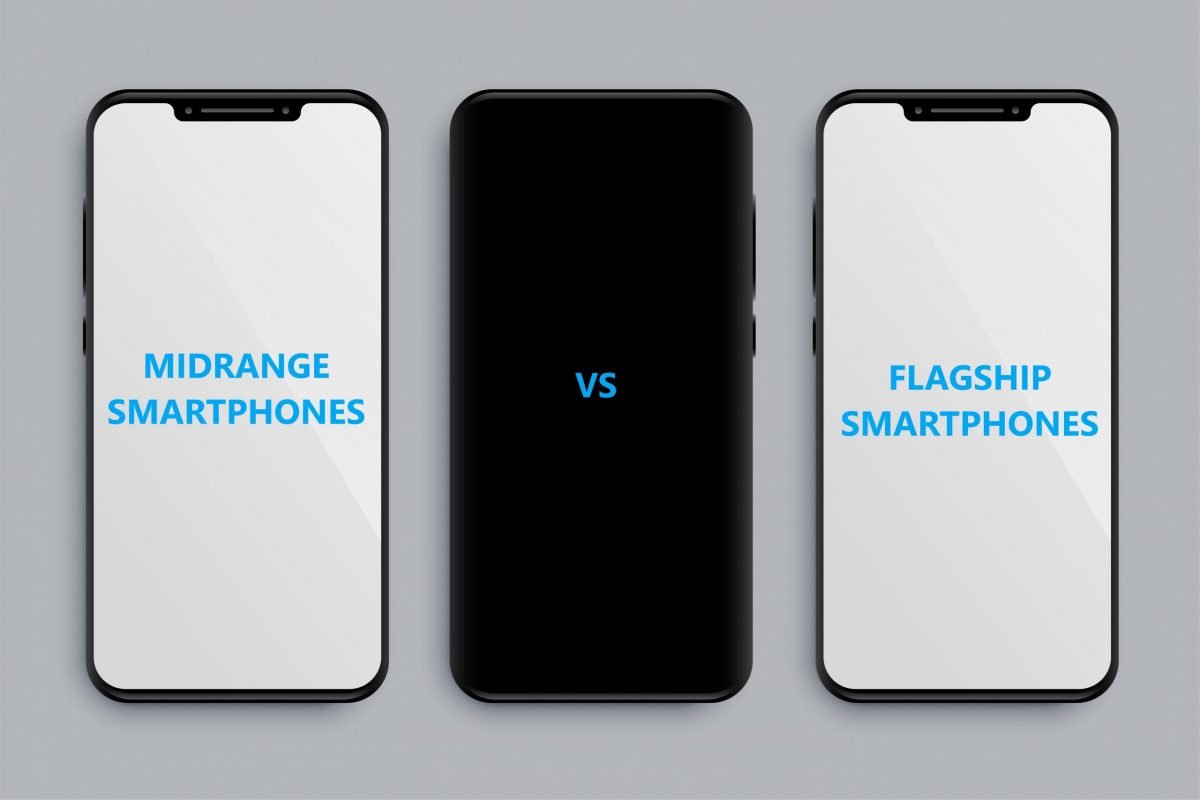 With Mid-range smartphones like Mi 9T Pro or K20 Pro, is there even a reason to consider Flagship smartphones from the same year, let alone from the previous year.

The reason being, All the smartphones from 2019 have had their full reviews taken and small bugs and minor fixes should be patched by now.

I am going to cover the following aspects of smartphones:

I tried to pick every Mid Range smartphone around 500 dollars. I did not pick any smartphone around 300 dollars because they can not compete with Flagships from even last year. For example, Huawei Honor 9X has HiSilicon Kirin 710F which can not even compete with Snapdragon 730, let alone Snapdragon 845. I am just talking about processor here, if I talk about the camera, things get even more sketchy.

We picked Flagship (Top of the line) smartphones from 2018. Some of them have Snapdragon 845, some have HiSilicon Kirin 980 and in the case of Apple iPhones, SOC is A11 Bionic.

The Apple iPhone case is peculiar. I chose the Flagship iPhone (iPhone X) from 2017, and Mid-range iPhone (iPhone XR) from 2018. This is because of the higher prices compared to other smartphones on the list. You can buy iPhone XR for 600 dollars right now on the official Apple Website.

The Mid Range smartphones that I will be comparing in this article are:

The Flagship smartphones that I will be comparing with the Mid-range are:

We have mentioned 10 categories that we would use to compare the Flagship and Mid-range smartphones. I would mention them here again.

The processing performance is one of the most important specifications that everyone looks at when buying a smartphone.

Let’s first have a look at the processors of different Flagship and Mid-range Smartphones.

But Processor is one factor that determines a smartphone performance and there are a ton of other factors. So do not think if a Mid-Range smartphone can beat a Flagship in processor performance, that the Mid-range is a superior device.

There is also one more concern that I could not cover in this category which I wanted to but could not due to the limited resources. The thing is the sustained performance of Mid-Range smartphones is not as good as the Flagship smartphones. If you still do not know about the sustained performance of the processor, I recommend reading this article.

Smartphones with the Same Processor have Different Performance, WHY?

There is a reason I have picked 10 categories to compare these devices and not just one. So, winning in the processor performance does not mean the Mid-range smartphones would win every category.

To measure the graphics in points is a really difficult task because unlike Geekbench, there is no one accurate application that can determine the 3D or Graphics performance of a smartphone.

To combat this, we will take an average of scores of different GPU tests from the 3DMark application for each smartphone and then compare them with each other.

There are six different tests for GPU performance in 3DMark application named as:

There are only three tests in 3DBench that are supported by all the smartphones whether Android or iOS, Samsung or Huawei. These three tests are:

So, I will take the average of the scores of these three tests. These scores will be added to the average of 2D and 3D from Passmark Scores (For Android, For iPhones).

For a detailed article on 3D performance:

If it is confusing, I will explain by taking one smartphone as an example. I will take Xiaomi Mi 9T Pro for this example.

This how I got the 3D Scores of all the smartphones. Let’s write the data in the table below to compare them.

Let’s compare the GPU scores and award points to each smartphone according to their scores.

Memory or Ram Performance is not important but is overlooked by most people and even reviewers. Most reviewers and content creators do not even look at the Ram speeds and only look at the Ram capacity which is unfortunate, to say the least. We are not going to make the same mistake.

Since there is not a lot of data on Ram’s performance. I could only find one reliable source that benchmarks Ram speeds i.e. Passmark.

Now that all the values are on the table, let’s assign performance by comparing scores.

This round is a clear winner for Mid-Range Smartphones, no comparison here.

Storage is also known as internal storage or ROM. It holds all of the media files as well as the operating system. If you are an average consumer who does not want to look at all the specifications of a smartphone. Just look at the storage performance because better storage performance means better overall performance in all the areas. I am saying this because storage is the bottleneck in most of the budget and Mid-Range smartphones.

I will be comparing the storage of smartphones by comparing their Passmark Disk Mark scores and UL Benchmarks storage scores. Basically, I am going to add the scores of ‘PCMark Storage’ and PassMark ‘Disk Mark’.

Even if these numbers seem insignificant to you. There is one thing that you must understand by now that not all storages are the same. Almost all of the Flagship smartphones have UFS 2.1 and the speed of storage is entirely different. ASUS ROG Phone is 30% faster than the LG V40 storage.

Let’s compare and assign the points to each smartphone now.

The Flagship Smartphones have finally won a round but with only a small margin.

The display or screen comparison is the toughest item on the list. I would have to compare different aspects of a display.

These are the aspects that will determine the display quality of a smartphone:

1 ) Maximum Brightness: The maximum brightness a smartphone display can achieve in cd/m2 or nits. The higher the better.

2) Color Gamut: A range of colors that are achievable by a display. The larger variety of colors a display can produce, the better would be the dynamic range of the display. Higher is Better.

There are five categories here, each of these categories(max brightness, color gamut, etc) now holds 0.2 points. If a Mid-Range smartphone could beat all Flagship smartphones in one category, it would win 0.2 points. To get a whole 1 point, a smartphone would have to beat every other smartphone on the other list in all the categories.

A close victory for flagship smartphones. But man it took me two whole days to complete display comparison.

In this category, We are going to compare the Wifi performance of all the smartphones on the list. We are going to test the transmission and reception speeds of Wifi which can also be visualized as upload and download speeds.

We will compare the score of reception and transmission separately and combine the points to get the results.

A clear victory for Flagship smartphones. No one really benchmarks the WIFI speeds. This is why Mid-range smartphones have mediocre wifi modem and no one knows about it.

I will be using DXOMark to quantify the scores of Camera of each smartphone.

To be honest, I do not agree with the results in this category. Most of the Flagships in the list could outperform all the Mid-Range smartphones on the list. Camera quality depends on various factors, just look at it yourself.

But I don’t have any other system to quantify the camera quality. We have relied on DXOMark results for the time being. We will come up with another way in the future to compare camera quality.

We will look at the battery endurance, charging speed and USB port type.

If you to learn about the various charging standards, try this:

I will be looking at the followings thing in the audio.

2) Signal to Noise Ratio: This represents the signal strength with respect to noise. If a speaker has 60dB, it means that the level of signal is 60dB higher than the level of noise. The higher the SNR, the better. SNR can be either positive and negative value if you represent it on the dB scale. Negative SNR means that Signal power is lower than the noise power.

3) Dynamic Range: It is the ratio of the loudest sounds to quietest sounds. It is measured in decibels or dB. In simple words, it represents how much variety of sounds can be played by a device simultaneously.
Dynamic range determines how well a device is able to play both loud and quiet sounds at the same time. The higher the dynamic range, the better.

4) Stereo Crosstalk: Stereo Crosstalk basically means how much sound bleed there is between the left and right channels. If there’s lots of cross-talk then that means that you are more likely to hear some of the sound destined for the left speaker sneak out of the right speaker as well (and vice versa). You always get a bit of cross-talk, even in high-end gear, but the more cross talk there is the less ‘stereo’ the music will sound. The larger the value of cross-talk is (the further away from zero), the better the quality of the sound coming from each channel.

Audio output from headphone jack or audio port is superior on Flagship Smartphones.

This section would include any special or extra features a smartphone might have. We would compare the unique features, some are popular like Screen to Body ratio, some are rare like Headphone Jack.

The categories in this section were independent except the Screen to Body Ratios one.

Let’s add the points of all the categories and get our final result.

The Mid-Range Smartphones are the clear winner holding 7.76 more points than the Flaghsip Smartphones.

The sources or websites I used to make this article are listed below.

All Gorilla Glass Types Are Almost The Same?

How to Buy a Great Camera Smartphone on Budget