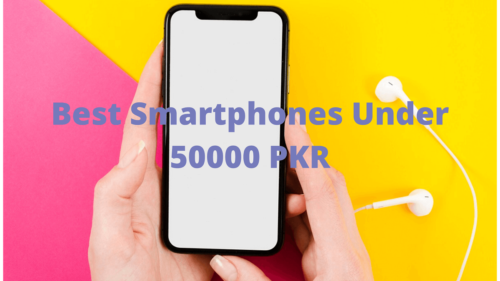 The smartphones in this range are more focused on providing more polished features rather than gimmicks like in 25K-40K range. Anyone willing to pay 50000 rupees for a smartphone would definitely look for reviews.

But before watching reviews, you should have an idea of what smartphones are you interested in. This is where this list will help.

Although, if you don’t like researching a lot, you could just get a smartphone according to the recommendations in this list, as we would try our best to give authentic information about the smartphones in 40000-50000 PKR range.

Note: Every person has different needs and demands and, therefore, each smartphone would be good or bad according to you.

I would suggest you look at the pros and cons of each smartphone to decide which smartphone would fulfill your needs.

Note: A good software experience (OS or Android Skin), Camera quality, Display Calibration are really important for a good smartphone. Good Chipset or Processor is not everything.

So, please do not think that a smartphone with a powerful chipset would be better than one with an inferior chipset.

Smartphones a number 1 will be most balanced overall and is not better than other smartphones in every category.

Just like Samsung Galaxy A30s, the Galaxy A31 is also full of compromises and the only reason it is worth considering is the good quality Super Amoled Display, Good Macro Camera, and Samsung One UI.

Samsung is still clinging to outdated Chipset Helio P65 which is not good in this price range. You can see for yourself in the ratings, what it lacks, and how it compares to other smartphones in this list.

For Full Specifications, use this GSMArena Link.

Oppo F15 is a new Mid Ranger from Oppo released in 2020. This smartphone is focussed on casual users too just like the Samsung Galaxy A31 and Oppo Reno 2F.

There is only one variant with 8GB RAM and 128GB ROM which is really impressive. This paired with the full HD Amoled Screen makes this smartphone perfect for casual users as this smartphone still has old Helio P70 Chipset which is not great for Gaming.

This smartphone has Kirin 810 which is a beast and crushes every other chipset in the competition. But if something is too good to be true, it’s because it is.

This Chipset even outperforms Helio G90T found in Realme 6 in gaming.

This chipset Kirin 810 does not support any Google Play service. This includes Google Play Store, Gmail, Maps, Youtube and most of the local applications (Banking apps, OLX, etc) would not even run on this smartphone because they need Google Play Services to authenticate the security of any application before installing.

Realme XT was the hottest smartphone in 50000 rupees when it came out. But there is a lot of competition now for this smartphone. Still, it manages to hold its ground against other smartphones on this list.

There is no outstanding feature of this Smartphone. This is a pretty rounded smartphone overall and it excels in every category. Be it display, camera, 8GB Ram, or under-display fingerprint sensor, this smartphone has got everything.

Oppo smartphones in all ranges have had underwhelming specifications for some time. This does not mean their smartphones are inferior to other brands, it just means that their focus is not on Gamers and heavy Users.

Oppo’s target audience are average or casual users who want a unique and sleek design along with a full-screen display(Pop-up Camera) for no interruptions on the display.

This is the best smartphone for users who do not care about Gaming or running benchmarks on a smartphone.

P.S. This might be the only smartphone with no Camera Bump.

Note: The score of this smartphone will be low despite it’s ranking because this rating system favors Chipset performance over build quality.

Xiaomi Redmi Note 9 Pro is, is just amazing (except the name). The camera on this smartphone can keep up with the Redmi K20 Pro/Mi 9T Pro.

Redmi Note 9 Pro has a manual mode for photos and videos in the camera application. The manual mode for video is great for content creators and Vloggers. This feature was only available in LG V-series or Sony smartphones a few years ago.

The Snapdragon 720G is arguably better than even Helio G90T in gaming for long term sessions. The huge battery with a great backup also helps.

The only thing Redmi Note 9 Pro does not have is either an Amoled Display or 90 Hz refresh rate, that’s it. Another good thing is that the Macro lens is of 5MP and it has an Autofocus.

If you are someone who needs a smartphone for video recording, Content Creation, or Vlogging, pick this smartphone.

Realme 6 Pro deserves to be in this list because the Realme 6 Pro price varies from website to website in online stores (49K-55K for 8GB variant). If you buy it from a local shop instead of an online shop, you can easily get this smartphone for around 50000 rupees.

This smartphone shares a lot of similarities with it’s cheaper brother Realme 6 and actually improves on some of the already great stuff.

The SD 720G is more power-efficient and provides more consistent performance over Helio G90T. This improves the battery life of Realme 6 Pro and it needs this battery boost because of the power-hungry 90 Hz display.

This smartphone is the second-best option for anyone looking for a great camera and video smartphone, the first being Redmi Note 9 Pro.

The rating system we used was relative. So the best camera smartphone in this list would get a 9.5 or 10 compared to other smartphones on the list.

It does not mean it has a 9.5 score compared to every other smartphone out there. The same is the case with Performance, Gaming, Software UI, and Display Ratings.

The prices we used were from online websites. This means, if you get any smartphone on this list from a local market, the prices could vary and they would most probably be 1000-3000 less than online stores.

These are the smartphones that didn’t make the list because of some bad features, outdated specs, bad cameras, or low price-performance ratios.

The price range from 40000-50000 Pkr is not very competitive. But still, every smartphone has something better than the others. So make sure to look at the pros and cons list given for each smartphone.

These are the smartphones we recommend for different categories:

All Gorilla Glass Types Are Almost The Same?